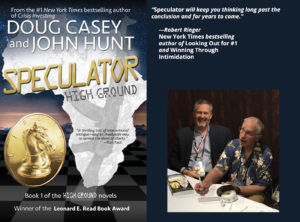 “Halfway between Frederick Forsyth’s Dogs of War and Ayn Rand’s Fountainhead. The gold mine in the jungle, the mercenaries, and the child soldiers keep you turning the pages. A morality tale with modern twists.” —John Mackey (Founder, Whole Foods Market and author of Conscious Capitalism)

Speculator, the first novel in the High Ground series by John Hunt and Doug Casey is now available for pre-oder on Amazon. Both the Kindle and paperback editions will be available to purchase on September 27th, 2016.

The greatest gold discovery in history draws a young Charles Knight to West Africa, where he unearths deception, violence, and romance. Xander Winn—a Dutchman on his own mission—mentors Charles on his voyage into the world of speculation and African politics. But a psychopathic rebel leader, the purveyors of a six-billion-dollar fraud, a team of mercenaries bent on early retirement, and the US government all get in his way.

Everyone wants him dead. But Charles plans to strike it rich.