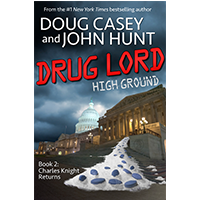 Charles Knight returns to the United States after seven years traveling the world. He embarks on two concurrent professions: one as a major investor in a small pharmaceutical company, and the other as the head of a black market drug smuggling and distribution operation. Charles has to sort through the legal and illegal, moral and immoral, and right and wrong as he navigates the war on drugs and the crony pharmaceutical industry.
Meet Tristana Dubocher, CEO of Charles’s company (Visioryme Pharmaceuticals), and her sniveling husband, Donald, an FDA minion. Meet Seth Fowler of the DEA, whose criminality is exceeded only by his quest for power. Get to know Rainbow, a teenage girl living on the street who runs drugs for the Alphabet Men. Their careers in the drug world are forever altered when they meet Charles.
Most importantly, meet Naked Emperor, a street drug that doesn’t cloud minds, but clears them. Naked Emperor prevents people from being able to lie to themselves. Politicians, environmentalists, academics, tele-evangelists, jihadists, journalists, central bankers, deep state actors, crony parasites, and everyone dependent on deception know that this new drug will turn the world against them. So they join forces to wipe Naked Emperor off the face of the planet.
They all want him dead. But Charles Knight intends to start a revolution. 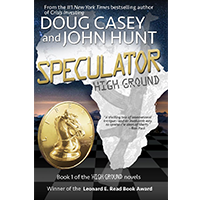 The greatest gold discovery in history draws a young Charles Knight to West Africa, where he unearths deception, violence, and romance. Xander Winn- a Dutchman on his own mission- mentors Charles on his voyage into the world of speculation and African politics. But a psychopathic rebel leader, the purveyors of a six-billion-dollar fraud, a team of mercenaries bent on early retirement, and the US government all get in his way.

Everyone wants him dead. But Charles plans to strike it rich. 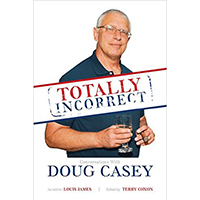 That most evil of creatures: a highly successful libertarian speculator, shares his views on many topics. This book is not for bed wetters and timid souls. Doug mounts a hard case for classic unfettered market capitalism and why speculators, by taking advantage of market dislocations, largely created by corrupt governments, help contain and punish a galaxy of meddling busybodies. 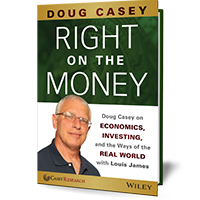 Right On The Money -Doug Casey

We are nearing the start of Act II of what Doug calls the “Greater Depression”–a time that will make the 2008 global economic meltdown look like a kid’s baking-soda volcano. The bad news: Only the well prepared will get through it without painful financial damage. The good news: The well prepared can come out far wealthier than they are today.

In this new book, Doug explains in his unabashedly irreverent style why you need to act now, what to do and how to do it… all sprinkled with a dose of humor and keen wit. 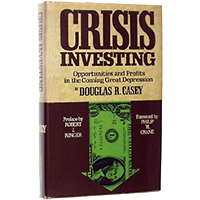 Talk-show financial guru Casey ( Strategic Investing ) begins on an incendiary note–describing taxation as “robbery”–and ends on another–maintaining that government has outlived its usefulness. In between, he declares that monumental public and private debt are poised to precipitate a “Greater Depression” for the 1990s, because “the dollar and the economy itself rest on confidence alone,” which he notes is a very unstable foundation. Nevertheless, Casey maintains that new technologies and wise selective investment (he has four chapters on gold alone) can bring about enormous profits. Outstanding here are a capsule demonstration of how an economy might work in a single community and a chapter on commodities, “the raw materials of civilization.” The book perched at number one on the New York Times best-seller list for twenty-nine weeks. 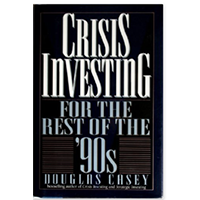 Crisis Investing for the Rest of the 90’s -Doug Casey

A very different, and much more sophisticated book than Crisis Investing. Doug’s favorite among his non-fiction books. 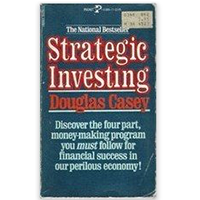 Published in Nov ’82, the bottom for the stock market, Doug explains why the market would rocket upwards—which it did. 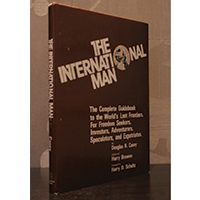 International Man– The original guide to making the most of your personal freedom and financial opportunity around the world. The largest selling book in the history of Rhodesia– a record that will never be broken. 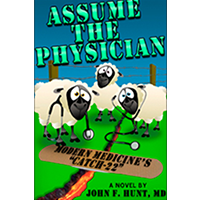 Assume the Physician is spicy, eye-opening, tear-jerking, belly-laughing chicken-soup for anyone who struggles in the medical system. In the humorous and radical style of Catch-22, MASH, and House of God, the novel lays bare the core problems with our current health system and the causes of medical hyperinflation, all from the perspective of a thoughtful young physician, Dr. Eddie Marcus, who has little respect for less-than-competent authorities.

In Higher Cause, Petur Bjarnasson battles against mercenary terrorists and violent agents of a Mexican revolution as he gathers investors and scientists to create a vast new source of wealth sufficient to overcome the catastrophic global currency devaluation orchestrated by the world’s central banks. 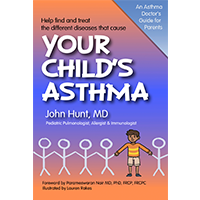 If you or your doctor thinks your child might have asthma, your next question should be: “What disease is causing my child to have asthma?” It’s a question often forgotten.

There are many diseases that cause asthma, and these diseases require different therapies.
Your Child’s Asthma is unique, just as your child is unique. This book is entirely focused on the diagnosis and management of the individual child. There is no cookbook medicine here.

In Your Child’s Asthma, you will learn about the different causes of asthma your child may have, and the treatments that are most effective for each cause of asthma. You will learn about viruses and allergies and everything else that causes wheezing and coughing in babies through young adults.

Your Child’s Asthma is authored by a pediatrician who is also a pulmonologist and an allergist/immunologist. Dr. Hunt provides parents with authoritative and up-to-date information, moderated always by straightforward common sense.