Just a few days left until you can read Doug Casey & John Hunt’s full new novel. (Pre-order here.) But, just to whet your appetite, here is the very beginning of …

Chapter 1
A RESOLUTION ALMOST UNRESOLVED
(A CLIFFHANGER IN THE JUNGLE)

Charles Knight stood tall at the edge of a precipice. Far below, the tumultuous Bangu River scoured its path along an ancient fault while its roar echoed up the canyon walls it had carved over the eons. He gazed over hundreds of square miles of thick African bush.

The decades-old geologic surveys conveyed none of the continent’s colors, its fragrance, the weight of its air. To the north stood steep hills capped with erosion-resistant dark-green basaltic rock—the congealed blood of extinct volcanoes. To the west, a ghostly band of gray clouds, pregnant with rain, floated at the horizon. When the rain arrived, it would come in torrents, the likes of which few people on the planet ever experienced.

The ledge on which Charles now stood had suffered the assault of such rain for millennia. Little remained of the limestone glue that had, for all that time, maintained the integrity of the rock. The additional stress of his 180 pounds simply proved too great. With a sound no louder than a sigh, the once solid rock transformed into fluid under his feet. He felt it happen. He knew what it implied. Gravity, its will defied too long, would wait no more.

He reached for anything solid and found nothing. Sadness at lost opportunities weighed upon him more than fear. His twenty-three years of life would end as an irregular stain on the jagged brecciated rock two hundred feet below, a stain that would appear only after agonizing bounces off outcrops that would mangle his body on the way down.

There was nothing Charles Knight could do but die.

And the nearest person who would give a damn was 5,000 miles away. 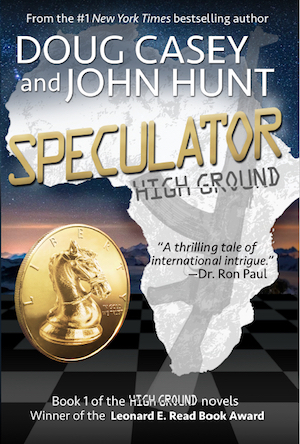